Drawing with both sides of your brain

I had a very fun art discovery during a visit to Berlin this Oktober. As is often the case when something goes wrong you have an opportunity to learn something new. I was drawing in my  notebook until suddenly I could hardly move my right hand.

We were at a free noon hour concert at the Berlin Philharmonic Orchestra. There were no seats so we sat on the floor leaning against a pillar. I couldn’t see the musicians but I could hear them. I sat on the floor with outstretched legs and started drawing as the …. played Saint Saens Carnival of the Animals.  A new page for each new animal. My drawings are kind of doodles. I just make marks according to how I feel the sounds and I don’t look at the page till the drawing is finished.

Then meine Frau sat too and leaned  lovingly against me. Caught up in the music, she didn’t realize she had pinned my arm to my chest.  Only cramped wrist and finger movements were available.  My arm was effectively paralyzed. I couldn’t draw and I didn’t want to disturb her pleasure in the concert. But necessity is the mother of invention. Here is one of the animal drawings. 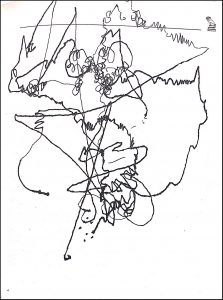 Carnival of the Animals – blind drawing

I realized that even though my right side was stuck, my left side was completely free. I thought of switching my pen to the left hand but then I realized that left hand holding the notebook was totally free to move. Instead of moving the pen I could draw by moving the notebook.  The pen was still and the drawing moved under it. It was actually a very interesting way to draw.

So no left brain or right brain, no right hand or left hand – everything at once. The constraint of an arm that couldn’t move gave me the opportunity to learn to use the other arm in a new way. I have expanded my range of possibilites.  I can both move the paper under the pen and move the pen against the paper.  If you have only one way to do something you are kind of in a rut. If you have a varety of possibilities you are free to roam where you want.