Creativity and the Feldenkrais Method

What is a drawing?

In the Feldenkrais Method we explore movement. What else is a drawing but movement, the traces that we leave on paper that show how our hands have moved? That gave me an idea while sitting on an airplane recently – jammed in a window seat and hardly able to move. The plane on the other hand was really moving! What if I did a drawing that was only about movement – the movement of the airplane?

Paul Klee once gave a lecture called Taking a line for a walk.  Usually we think of drawing as a way of describing the appearance of things. His idea was not to show how things look but to show movement. He used a line to describe movements through space kind of like taking a dog for a walk.  If this interests you here is some information about Klee’s drawing ideas.

Oliver Reimer, the less celebrated Ontario Street artist, took a line for a plane ride. Here is my drawing. It a kind of seismograph of the flight from when the captain announced our decent till the plane came to a stop in, what is loving known to some as, “Winterpeg” — my old home town.  I’ll describe the constraints of my method below the drawing. 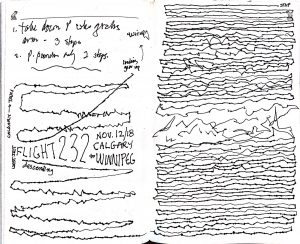 I rested my right elbow on the arm rest and then drew (mostly) horizontal lines with an even speed. Where you see dots on the lines is where the jerking of the plane jogged my elbow and caused the pen to stop for a moment digging into the notebook paper. I started on the left side page of my notebook and worked my way down with descending lines.  When I ran out of paper at the bottom I moved across to the right page and worked my upward with horizontal lines till the plane conveniently stopped. Actually I cheated – I stopped when I ran out of page even though we hadn’t quite got to the “unfasten your seatbelts” place. You can see the place in my seismograph where the plane touched down.  It was not a smooth landing.

I think it fits well into a Feldenkrais approach.