My Feldenkrais Method® training was with Paul Rubin and Julie Casson Rubin who were both students of Moshe Feldenkrais. Our classes were every June and October in Chicago over a period of four years. This kind of learning takes many hours of practice over time, to digest. In all we had 800 hours of training. Every year I take advanced training courses where I can work with teachers and colleagues to keep learning.

I first learned about this method in “lying-down-qigong” lessons taught by Sharon DeCelle in a Taiji camp led by Dr. Yang Yang in Champaign Illinois.

I like learning by doing. I love that the Feldenkrais Method is about learning to be aware of yourself using movement as the medium. We learned the theory and embodied it in our practice. Or maybe we embodied it and then attached the theory to what we knew in ourselves. 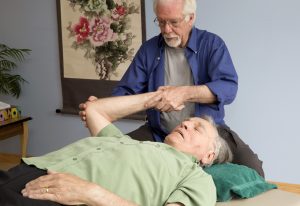 I’ve never loved the kind of learning where you memorize material or imitate your teacher. I like to explore and make my own mistakes and discoveries. A teacher who can point you in a good direction to explore – that’s what I like and that’s what I aspire to be.

I am continually delighted to discover new things about something as simple as walking up and down stairs or walking along the sidewalk. As I have become more aware of how I organize my back and hips and legs and neck, it becomes possible to do those things with less and less knee pain.

I feel so inspired to know that I can keep changing in ways that make life easier and more fun. Probably being in my senior years makes it easier to let go of achievement and make life more about appreciation. I find it encouraging to know that I can learn to move easier, with pleasure and maybe even some measure of elegance. I can get up from the floor easily now. In a few years it will look elegant!

I’ve been teaching Taijquan for more that 10 years. Many years ago I began learning the form taught by the Toronto Taoist Association. Later I studied the Yang Long Form with Peter Puna and subsequently with Martti Ahonen. I wasn’t a devoted student in those days. Later in China a calligraphy teacher told me that if I wanted to learn Chinese calligraphy I needed to learn Taiji. Toward the end of the 90’s I began learning the 24 Forms choreography with Master Peng Youlian. About the same time I retired from a career as a high school Visual Arts teacher and had more time to devote to a new interest. Subsequently I learned the longer forms and then began assisting Master Peng with large classes at the Thunder Bay 55 Plus Centre.

In 2006 I met Dr. Yang Yang when he came to present at the International Forum on Taijiquan 2006. Since then I have studied with him in camps and workshops. The picture is from a camp at the University of Scranton, PA this July 2018. He brings together his mastery of the Chen Style with a PhD in Kinesiology – a really interesting meeting of East and West.  I love the way he brings these disciplines together in his book Taijiquan: The Art of Nurturing, the Science of Power.

Currently I teach Taiji at the Thunder Bay 55 Plus Centre.

I studied Fine Arts at the University of Manitoba. That came after a rather aimless general BA and a couple of years studying theology. I came to art through a transformative moment during a period of profound depression where a painting by Ivan Eyre jolted me into seeing the world with fresh eyes. After graduating from the School of Art, I taught visual arts in highschools in Thunder Bay and sometimes as a sessional lecturer at Lakehead University.

Mostly I’ve been a painter. I’ve been most drawn to self-expression and abstraction more than representation.

With the Feldenkrais approach you unlock creativity. These gentle explorations lead you to accept the kind of body-mind you have. When you can recognize and accept yourself you open up to new possibilities. As you begin to move more freely you also become free to see all the other potential of yourself.

View samples of my artwork.

These three elements all fit together well . They are all require expressing yourself through your body. There are theories and ideas and there is history of course, but the ideas are all formed around and based on sensation, emotion, thought and movement.

Art for me has always been a way of playing with colour and form, and creating some kind of unity out of the chaos of possibilties. I take a playful experimental approach and it is a kind of conversation between me and the elements of shape, colour and form. View samples of my artwork.

Taiji was initially a father-daughter bonding activity. Later it was a way to rehab my injured knee (and my shoulders). Then I got really hooked and after a time began teaching. Taiji is like painting in the air with gestures that you do with your whole body. It is a way of learning how to move with grace and power.

The Feldenkrais Method, for me, is a fast track to the inner aspect of Taiji. In specifically Feldenkrais explorations there are no forms or poses. It is only learning using your body so each part does it’s role in the right proportion and the right sequence.

So the Feldenkrais Method has helped me learn to do Taiji better and to be a better teacher, this method of learning leads to doing everything better. Walking get easier, flights of stairs are not a challenge – well five stories is tiring but not stressful in muscles or joints. Sitting or standing get better as you become more aware of how you are doing it. The creative process is released as you understand where you are holding yourself back.